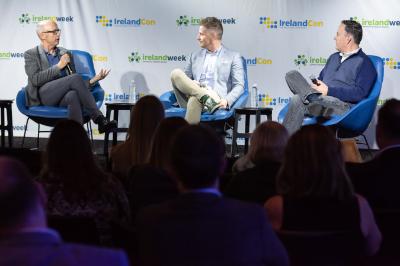 On Nov. 1, 2019, just a few weeks after Ireland’s Taoiseach Leo Varadkar visited Los Angeles and Loyola Marymount University, the university again took part in a major event for the Los Angeles-Irish community. For the second year in a row, LMU hosted IrelandCon at its Playa Vista campus, which is the flagship conference of the citywide IrelandWeek. The event provided an opportunity to further strengthen ties between LMU, Ireland, and LA’s technology and entertainment industries.

BCLA Dean Robbin D. Crabtree and SFTV Dean Peggy Rajski kicked off IrelandCon with welcoming remarks. Dean Crabtree called attention to the Irish influences present across many disciplines at LMU, as well as the many ways in which LMU students engage with the Irish business and creative communities in LA.

Attendees also heard from Orla Keane, the Consul-General of Ireland to Los Angeles; Patrick O’Donovan, the Minister of State at the Department of Finance and the Department of Public Expenditure and Reform; and Rob Frierson, director of economic policy for L.A. Mayor Eric Garcetti.

Panels on various topics were presented by prominent players in L.A.’s business, technology, film, TV, and animation sectors. The dynamic and impactful discussions that unfolded highlighted the many similarities between Ireland and Los Angeles, as well as the “very best of contemporary Ireland, showcasing Irish creativity and innovation in technology, business, the arts, and sporting life,” said Consul General Keane.