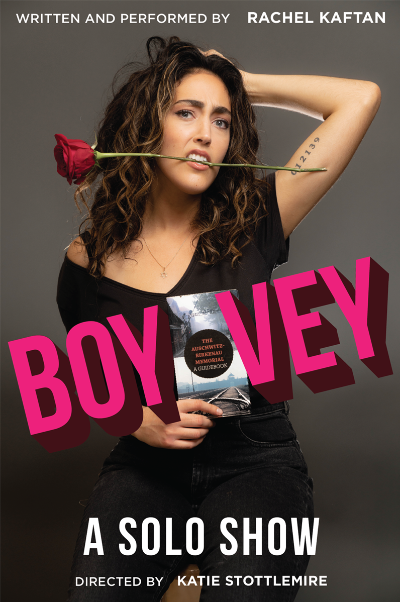 For Rachel Kaftan ’21, receiving the Lumer Fellowship affirmed that her creative work could be taken seriously.

Rachel had known for a while that she wanted to write and perform a play that would join her family’s Holocaust history, her own intergenerational trauma, and her love life. However, she did not yet know how she could make this dream come to life. Professor Holli Levitsky suggested Rachel apply for the Lumer Fellowship, which would enable her to take this play from script to the stage. And, just like that, BOY VEY was born.

“Getting [the fellowship] really inspired me to take my own work more seriously because all of the sudden someone had invested in it,” Rachel said.

The BOY VEY website describes the show as “a dark-comedic one-woman show” in which “a Jewish girl’s quest for true love unveils the bizarre connections between her misbegotten dating life and inherited Holocaust trauma.” The play is hilarious, touching, and quirky.

While during a normal year, the fellowship award would have covered the expenses for performing an on-campus production, the COVID-19 pandemic had other plans for BOY VEY. In order to put on the show, Rachel, the play’s director Katie Stottlemire, and other crowdfunding team members worked to raise more than $30,000, on top of the fellowship award! Doing so allowed Rachel and her team to rent out the Santa Monica Playhouse, which Rachel’s Theatre Department advisor Neno Pervan suggested as a venue for the show. From there, Rachel and her team were able to live-stream the show to audience members’ homes.

But rewinding a bit, what made Rachel interested in joining the Theatre Arts and Jewish Studies communities at LMU?

Having grown up in Seattle and always held a deep love for acting, Rachel knew Los Angeles was where she needed to be. She was originally drawn to LMU after her first time visiting when she noticed how many students on campus were engaged in film, theatre, and other artistic endeavors all across campus. But she hadn’t anticipated that enrolling in a Catholic university would inspire her to explore her Judaism to a greater degree than she had ever before.

She joined the LMU Hillel community and was welcomed by Rabbi Zachary Zysman, who Rachel called “one of the best adult figures on campus.” By Rachel’s Junior year, Rabbi Zach had introduced her to Dr. Levitsky, who encouraged Rachel to enroll as a Jewish Studies minor. Rachel credits the Jewish Studies Department with giving her the chance to feel more sturdy in her Jewish identity and specifically views the Lumer fellowship as the catalyst for integrating her Jewish culture into her theatrical work.

Now that Rachel has graduated from LMU with a Theatre Arts degree and a minor in Jewish Studies, she’s begun thinking about the question recent graduates hear all the time: “What’s next?” Rachel has plans to keep BOY VEY alive at the Santa Monica Playhouse, and also hopes to one day take BOY VEY on tour to different festivals. Even further in the future, Rachel is considering going back to school to achieve an MFA in playwriting.

Rachel continuously returns to the Jewish cultural value of “questioning” as being one of the reasons she had the “chutzpah” to put on this play. Rachel said she’d advise any Jewish student at LMU to “study and explore your Jewish religion and cultural identity in the way that you need to, not in the way that you might be taught to believe,” and the Jewish Studies minor is a great place to do that.