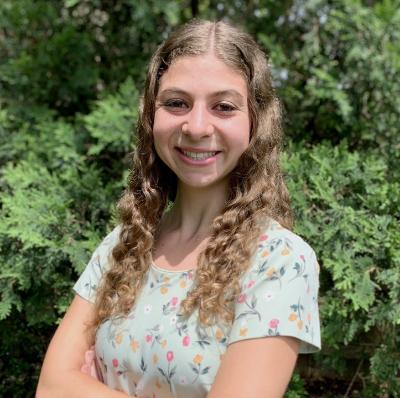 Gabrielle Engerman '20, an Accounting major and Jewish Studies and Spanish double minor, previously traveled to Israel on Birthright and had such a positive experience that she wanted to return as soon as possible. Her efforts in getting accepted into Onward Israel, a program where college students intern for eight weeks in the industry of their choice, explore the country on the weekend and participate in educational programming and seminars, resulted in her being awarded the Lumer Fellowship. The program experience helped her deepen her global perspective and her connection to her Holocaust studies.

While Gabby entertained many ideas for undergraduate study, including acting, she knew she wanted to be in Los Angeles and was inspired to learn more about Jewish Studies after taking Dr. Holli Levitsky's course Literature of Exile and Terror. Having also taken Theological Studies' course Introduction to the Hebrew Bible, Gabby found that adding the minor would round out not only her studies, but also the exploration of her Jewish identity.

"It was cool to learn about my own Jewish history since I didn’t study it when I was younger, and I really liked exploring the cultural side of things. I loved the small class sizes and engaged learning because they gave me more opportunities and individual attention."

While scheduling for the Jewish Studies Israel trip did not match up with her plans, she knew she wanted to visit for a longer period of time after her 10-day Birthright experience. So when the opportunity of an 8-week program arose, she knew she had to go for it.

"My mom's entire family is in Israel, so I had been there when I was younger, but I fell in love with everything there when I was there on Birthright and I was determined to go back for a longer period of time."

Gabby interned for a real estate investment firm during that summer and explored everything Israel had to offer—nature, farms, desert, beach, old city, new city, and everything sacred and secular. While very much like Los Angeles, but without the stress of needing a car, she felt she could make the most of her time working there.

But while she cites her accounting major as her career goal, her minors in Jewish Studies and Spanish were her passions. She reflected on the courses she had taken with Jewish Studies especially, and how they really deepened her appreciation for her heritage. Projects that challenged her to speak to primary sources about their experiences helped her connect to the experiences of her grandfather, a survivor who fled from Poland to Israel and fought in the Israeli War of Independence, and her grandmother who, though Israeli, was born in Egypt, and also fled to Israel.

With many opportunities throughout her undergraduate career, Gabby kept traveling. She studied abroad in Spain, and took her own personal trip to Poland during that time. But her love for Israel remained, so much so, that she decided to move there permanently after graduation. While COVID-19 restrictions delayed her dream slightly, she finally relocated to Tel Aviv, and has settled there. She has attained Israeli citizenship and is studying to become fluent in Hebrew while working as a Risk Advisory Analyst at Deloitte.

Gabby's advice for Jewish Studies minors: "I chose classes that I loved, and enjoyed them so much that it didn’t feel like a chore to take them. Don’t settle for classes you don’t love." She says if you care about the subject matter, you’ll want to keep learning. Get involved, go to the events, and be passionate about what you do. And if the pandemic has taught her anything, DON'T put off the things you want to do—you never know if you’re going to be denied the opportunity later.