About The Los Angeles Lonergan Center

Preserving the Catholic and Jesuit Intellectual Tradition in the 21st Century 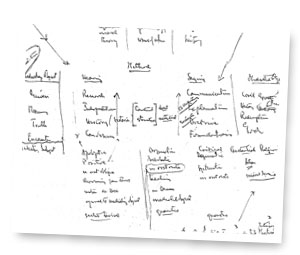 Lonergan's outline of his conception of eight functional specialties

The mission of the Los Angeles Lonergan Center is to promote and support the scholarly study and implementation of the ideas of Bernard Lonergan, S.J., in the areas of methodology, philosophy, theology, and economics.

"There is bound to be formed a solid right that is determined to live in a world that no longer exists. There is bound to be formed a scattered left, captivated by now this, now that new development, exploring now this and now that new possibility. But what will count is a perhaps not numerous center, big enough to be at home in both the old and the new, painstaking enough to work out one by one the transitions to be made, strong enough to refuse half measures and insist on complete solutions even though it has to wait."
-- Bernard Lonergan

The Center is located on the third floor of University Hall, Room 3408, at Loyola Marymount University in Los Angeles.