Bellarmine College of Liberal Arts > Institute for Leadership Studies > About

As a center for global thought leadership, the Global Policy Institute focuses on addressing the challenges and opportunities of an increasingly interconnected world through innovative, transformative thinking and a diversity of ideas. Global Policy Journal, fellows, events, and policy projects provide channels for experts, thought leaders, and decision makers to identify, debate, and develop constructive solutions.

Located between the Pacific Ocean and downtown Los Angeles, Loyola Marymount University is ranked third in “Best Regional Universities/West” by U.S. News & World Report. Founded in 1911, LMU is the largest Jesuit Catholic university for undergraduates in the Southwest, with more than 6,000 undergraduate students and more than 3,000 graduate and law students. A comprehensive university, LMU offers 60 undergraduate majors and 55 minor programs, along with 39 master’s degree programs, one education doctorate, one juris doctorate, one doctorate of juridical science and 10 credential/authorization programs. LMU news and events are found here.

College of the Year

In April of 2006, the Institute for Leadership was awarded the “Private University of the Year” award from The Washington Center. This award is granted to recognize the institute’s outstanding contributions in developing ethical and responsible student-leaders. 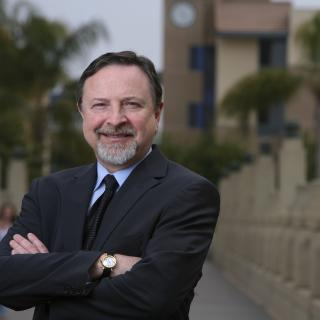 Professor Genovese has published fifty books, including How Trump Governs: An Assessment and Prognosis (Cambria Press, 2018), The Paradoxes of the American Presidency with Thomas E. Cronin and Meena Bose (Oxford University Press, 2018), The Trumping of American Politics (Cambria Press, 2017), The Encyclopedia of the American Presidency (Facts on File, 2017), Routledge, 2015), Leadership Matters with Thomas E. Cronin (Paradigm, 2013), Memo to a New President: The Art and Science of Presidential Leadership (Oxford University Press, 2008), The Power of the American Presidency 1789-2000 (Oxford University Press, 2000), and Women as National Leaders (Sage Publishing, 1993). His articles and reviews have appeared in the American Political Science Review, The Times Literary, Supplement, Public Opinion Quarterly, Presidential Studies Quarterly, White House Studies, The Journal of Leadership Studies, and elsewhere.

Genovese has won over a dozen university and national teaching awards, including the Fritz B. Burns Distinguished Teaching Award (1995), and the Rains Excellence in Research Award (2011), and the Rains Career Service Award (2019). Professor Genovese frequently appears as a commentator on local, national, and international television and radio (e.g. CNN, NPR, CBS). He is also Associate Editor of the journal White House Studies, is on the Editorial Board of the International Leadership Journal, has lectured for the United States Embassy abroad, and is editor of Palgrave Macmillan Publishing's "The Evolving American Presidency" book series. Professor Genovese has been The Washington Center's "scholar-in-residence" at three Democratic national political conventions and the 2008 presidential inauguration, and served as scholar-in-residence at the 2012 Republican National Convention. In 2004-05, Professor Genovese served as President of the Presidency Research Group of the American Political Science Association. He is currently on the Advisory Boards of The Washington Center, The Center for the Study of Los Angeles, and is the Chair of the Board of the Foundation. During the presidency of George H.W. Bush, Genovese served as a consultant on crisis management at the Department of Defense and the Pentagon.

In 2001, Michael A. Genovese was honored by the University with an Endowed Chair. The Loyola Chair of Leadership Studies was created to assist in the development of student leadership programs and promote research on leadership.

In 2006, in recognition of his academic achievements and publications, Michael Genovese was named a Fellow at The Queen's College, Oxford University. The honor is the first of its kind awarded to an LMU faculty member.

More on Michael A. Genovese

Janie Steckenrider is Associate Professor of Political Science at LMU and focuses on the areas of gender politics and political gerontology. Dr. Steckenrider received her Ph.D. from the University of Southern California and has an M.A. from the University of Notre Dame. Her publications include Women as Political Leaders, co-authored with Michael Genovese (Taylor and Francis Press, 2013), and New Direction in Old Age Policies (SUNY Press, 1998), where she highlighted aging as a female phenomenon. Her work has also been published in Journal of Alzheimer's Disease, Journal of Health and Human Services Administration, Southwest Journal of Aging, Encyclopedia of Aging, and Journal of Women and Politics. Dr. Steckenrider has been a Research Consultant to the National Council on Aging, a recipient of Administration on Aging grants, and has served on the Boards of Directors of a hospital, a skilled nursing facility, and a municipal senior commission.