Scroll below to see events, photos, and videos in celebration of the bicentenary of the Greek Revolution of 1821 and 200 years of Modern Greece and its people.

Film screening: By the Light of Thine Eyes, 2021

The commemoration of the 200th year anniversary of the Greek Revolution of 1821 came to a close with the screening of By the Light of Thine Eyes, 200 years of Greece (“Σε γνωρίζω από την όψη” - 200 ΧΡΟΝΙΑ ΕΛΛΑΔΑ), produced by the GREECE 2021 Committee.

The film imaginatively narrates the two centuries of modern Greece. Based on archival material and evidence, it approaches the subject by highlighting not only Greece’s military and political history but providing a look at the fields of science, arts, and everyday life.

The screening was co-hosted by the Caloyeras Center and the Los Angeles Greek Film Festival (LAGFF) under the auspices of the Consulate General of Greece in Los Angeles.

You may view the film here.

Y1: Silence of the Deep

In collaboration with the Los Angeles Greek Film Festival (LAGFF), and under the auspices of the Consulate General of Greece in Los Angeles, the Caloyeras Center screened Y1 - Silence of the Deep in remembrance of the heroes who fell during WWII.

The documentary tells the story of the unexplored shipwreck of the legendary submarine Y1: Lambros Katsonis and its heroic crew. After a series of successful attacks against German ships, Y1 was sunk by a German submarine chaser near the island of Skiathos on September 14, 1943.

During the attack 32 men were killed and 17 were captured; only 3 managed to escape by swimming for 9 hours in order to get to the shore. They would later rejoin the Greek Naval forces in Beirut in order to keep fighting for the Allied cause.

Among them, Second-in-Command Officer Elias Tsoukalas. His award-winning book Submarine Y1 - Lambros Katsonis, together with archival material, personal diaries and letters, and family members’ interviews, was used to tell audiences the untold stories of these WWII heroes.

The location of the submarine wreck remained a mystery for 75 years until May 2018, when Team FAOS, an independent film production company, with the help of the Hellenic Navy, managed to locate it and record it for the first time northwest of Skiathos, at a depth of 253 meters.

The screening was followed by a discussion with producer and cinematographer Stelios Efstathopoulos and Bilio Tsoukala, journalist and daughter of Officer Elias Tsoukalas who shared the behind-the-scenes challenges of locating the wreck, coordinating the search, and funding both the expedition and the filming of the operation.

Dimitra Kasdagli, Festival and Programming Manager, and Eleni Kafetzi, Jury and Outreach Coordinator, participated in the discussion on behalf of LAGFF.

As we continue the commemoration of the bicentenary of the Greek Revolution of 1821 and 200 years of Modern Greece in the making, the Caloyeras Center was honored to welcome to LMU Sir Michael Llewellyn-Smith for a presentation of the first volume of his biography of Eleftherios Venizelos.

Sir Michael Llewellyn-Smith is a former British ambassador and historian of Greece who has published extensively on Greek history and culture. He completed his doctorate in Modern Greek history at St. Antony's College, Oxford.

He served in the British Diplomatic Service for 30 years and has been awarded the highest British honors. He is an Honorary Fellow of St. Antony's College Oxford, a Vice President and member of the Council of the British School at Athens, member of the Council of the Anglo-Hellenic League, Honorary Fellow of the Eleftherios K. Venizelos National Research Foundation in Chania, and Patron of the Friends of Mount Athos.

He has been a visiting Fellow of the British School at Athens, Princeton University, the Onassis Foundation, and holder of the Venizelos chair of modern Greek studies at the American College of Greece (2009-2010). He is currently a visiting Professor at King's College London.

His books have covered a variety of topics ranging from Greece's ill-fated venture into Asia Minor that ended with the destruction of Smyrna; the history, culture, and folklore of Crete; the Modern Olympic games of 1896; a cultural history of Athens that presents the life and history of the city across the centuries; as well as a history of the British embassy in Athens, which was Eleftherios Venizelos' house before it became the British embassy in 1936.

The life and politics of Venizelos has been a lifelong interest of his. His book Venizelos: The Making of a Greek Statesman, 1864 – 1914 is the first volume of a biographical study of Venizelos that covers his formative years, his political apprenticeship in Crete, and his energetic role in the island's emancipation both from Ottoman rule and the arbitrary rule of Prince George of Greece

The Caloyeras Center was honored to co-host this presentation with the Embassy of Greece in the US and welcome back to LMU her Excellency the Ambassador of the Hellenic Republic to the US, Alexandra Papadopoulou, for the opening remarks to Sir Michael Llewellyn-Smith's talk. 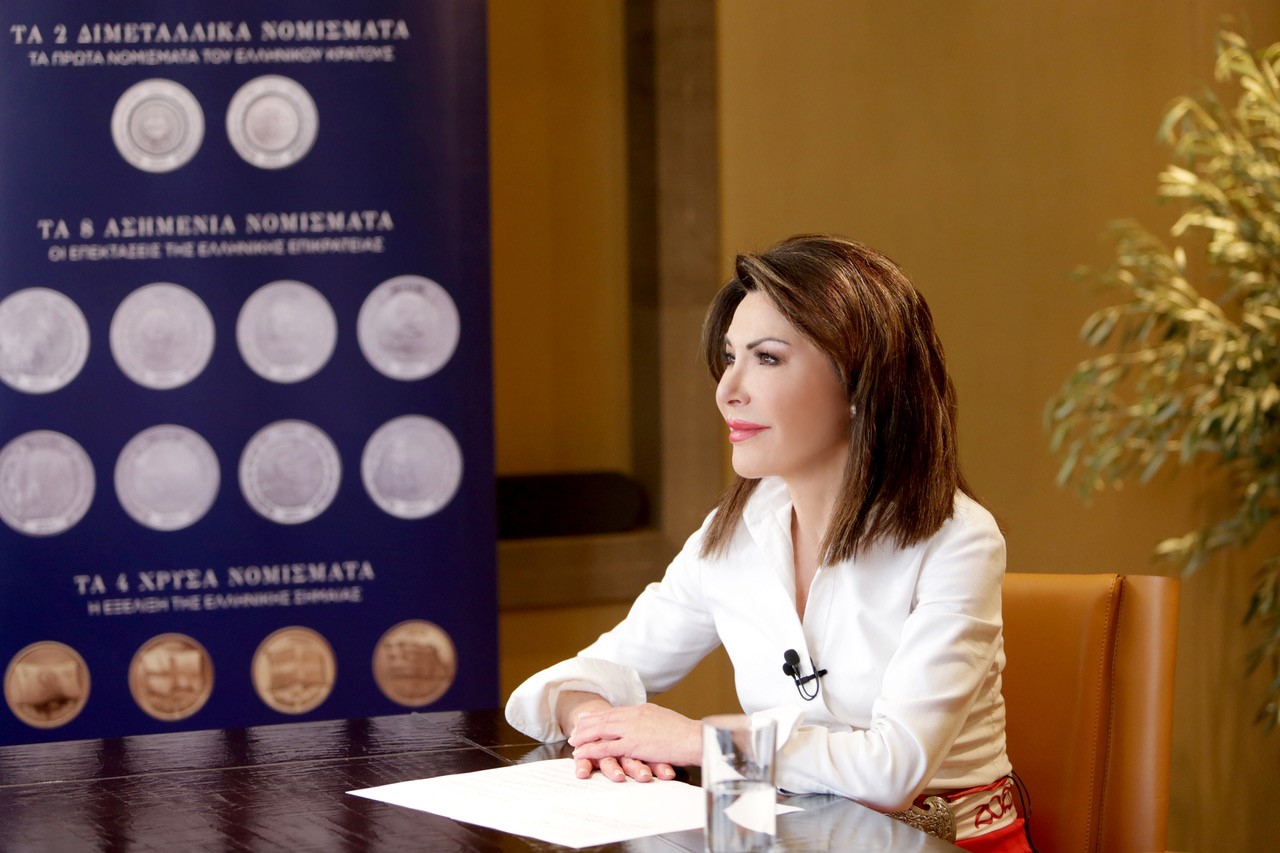 In celebration of the bicentenary of the Greek Revolution of 1821 and 200 years of Modern Greece and the people who have made a mark along the way, the Caloyeras Center was honored to welcome for this year’s Zoe Caloyera Distinguished Lecture and Leadership Award, Mrs. Gianna Angelopoulos-Daskalaki, ambassador-at-large of the Hellenic State and the president of the GREECE 2021 committee charged by the Greek government to organize the bicentennial celebrations.

The Center presented Mrs. Angelopoulos-Daskalaki with a Leadership Award for her life-long commitment and contributions to public life, education, and philanthropy; as well as her tireless promotion of Hellenic values and ideals, in Greece and abroad.

The Center’s Director, Dr. Christina Bogdanou, and BCLA Dean Robbin Crabtree welcomed the honoree to LMU on behalf of the University President, Tim Law Snyder. Her Excellency, the Ambassador of the Hellenic Republic to the US, Alexandra Papadopoulou congratulated Mrs. Angelopoulos-Daskalaki.

The award was presented by Dr. Nasreen Babu-Khan, the founder of the Zoe Caloyera Distinguished Lecture Fund in honor of her grandmother, Zoe Caloyera.

In 1996, Costas Simitis, the Prime Minister of Greece at the time, appointed her to lead the country’s successful campaign to host the 2004 Olympic Games. In 2000, when slow progress and gridlocked bureaucracy put Athens in danger of losing the Games, she was asked to assume the Presidency of the Athens 2004 Organizing Committee and save the project.

Her memoir, My Greek Drama, was published by Greenleaf Book Group in May 2013, and became a top ten New York Times and Wall Street Journal bestseller.

Mrs. Angelopoulos has served as Vice-Chairman of the Dean’s Council of Harvard’s Kennedy School of Government (HKS) since 1994 and now also serves as a member of the Advisory Board of the Center for Business and Government.

In 2011, she established the Angelopoulos Global Public Leaders Program at the HKS to bring distinguished leaders to Harvard in order to interact with students, share lessons learned and reflect upon the next phase of their public service.

Mrs. Angelopoulos is the founder and sponsor of the Angelopoulos Clinton Global Initiative University (CGI U) Fellowship Program (100 young Greek entrepreneurs have benefitted), and a leading philanthropist for projects in Greece and around the globe.

The Zoe Caloyera Distinguished Lecture Fund is a signature series that brings to the LMU campus outstanding individuals in the fields of art, culture, science, and public life relevant to the ongoing work of the Caloyeras Center for Modern Greek Studies. It is made possible through the generous support and commitment of Nasreen Babu-Khan and Howard Lehrhoff to Hellenic Studies and the Southern California Greek-American community.

Read more about this event on The Hellenic Journal.

In the footsteps of the Americas: The Greek Revolution of 1821 and its place in world history

In celebration of the bicentenary of the Greek Revolution of 1821 and 200 years of Modern Greece and its people, the Caloyeras Center was honored to welcome to LMU Professor Roderick Beaton, renowned scholar of Hellenic Studies. Professor Beaton is a Fellow of the British Academy and Commander of the Order of Honor of the Hellenic Republic. He is a member of the Committee “GREECE 2021” which has been charged by the Greek government with overseeing events commemorating the 200th anniversary.

Professor Beaton is the author of many books and articles about aspects of the Greek-speaking world from the twelfth century to the present day, including An Introduction to Modern Greek Literature (1994); George Seferis: Waiting for the Angel. A Biography (2003); Byron’s War: Romantic Rebellion, Greek Revolution (2013), all three of which won the prestigious Runciman Award for best book on the Hellenic world, and Greece: Biography of a Modern Nation (2019, now a Penguin paperback). His latest book, an overview of Greek history from the Bronze Age to 2021, is due to be published in autumn 2021 with the title The Greeks: A Global History.

The Caloyeras Center was honored to welcome her Excellency the Ambassador of the Hellenic Republic to the US, Alexandra Papadopoulou, for the opening remarks to Professor Beaton's talk.

The Forgotten Heroes of the Balkan Wars: Greek-Americans and Philhellenes, 1912-1913

A book presentation by Peter G. Giakoumis, author and military historian and researcher.

2021 marks the landmark 200-year anniversary of the Greek War of Independence of 1821 and 200 years of Greece as a modern nation. The Caloyeras Center, in collaboration with other Greek-American community organizations, will celebrate this monumental anniversary throughout 2021 with a series of events celebrating the significance of these 200 years of history for Greece and the world, as well as the people who have contributed to it, in Greece and in the diaspora.

Peter S. Giakoumis talked about the Greek-American regiment of soldiers volunteering from all over the US who travelled to the front lines of the Balkan Wars of 1912-1913. Diving into official military reports, contemporary newspaper articles, rare photographs, letters from the front and private archives, Giakoumis offered an in-depth account into the heroism of Greek immigrants and the decisive role they played in the war.

The event was co-hosted by the Caloyeras Center and the Hellenic Library of Southern California.